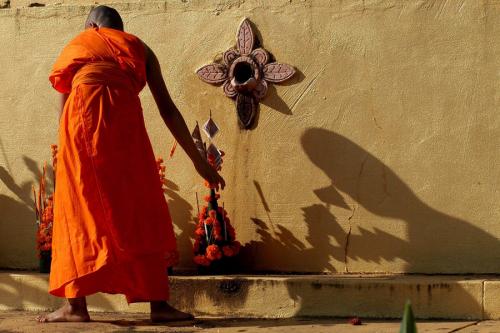 I have got everything on my left side Jan says. Impossible I reply, but Jan is sure about it, he has got everything at the left side of his body, like this infected thumb now. Jan is an indispensable member of our community, but when he starts to talk about his body I am speechless. Every physician knows the numerous people who entertain medical opinions about themselves, which in no way can be forced into a scientific straitjacket.

This is about the ancient problem of human perception. The philosopher René Descartes considered it so untrustworthy, that human perception alone couldn’t convince him of his own existence. I think, therefore I am he said. That was the only thing he knew for sure. His eyes he didn’t believe. This one is not very helpful one is inclined to think, but still his critical attitude towards human perception has made possible the development of science. Without him no experiment, no modern medicine. So René Descartes already knew that we see what we want to see. Or that we don’t see what we don’t want to see, like the surgeon who said that there is no soul, because he never saw one, or like so many who say that the human brain is a supercomputer. Soon we will be able to replicate it. Artificial intelligence is a question of time. We feel that these propositions are not true or rather we wouldn’t like them to be true. But what is the problem then? Certainly there is reality in the proposition, that objective perception doesn’t exist. There is a relation between what we perceive and ourselves. The two cannot be separated. They are dependant on each other. We change the thing we perceive solely by perceiving it. So after we invented the computer we started to look at the human mind as a computer. We recreate reality by perception. We perceive creatively. When we perceive no-soul long enough soul will disappear. This might sound acceptable enough, but what about the even further going proposition that the thing which is perceived recreates ourselves in its own image and semblance? The perceived object has a creative influence on the perceiver. The perceived object makes us different. The perceived object can gain power over us. Nobody forgets modern times of Charley Chaplin, in which a worker at a conveyer belt gets mad and cannot stop turning bolts. Man at the conveyer belt is remade by the conveyer belt to man-at-the-conveyer-belt. After a while he is nothing else. He is dehumanized by the machine he himself created. And this interaction is unique for the creative perceiver, because with a monkey for example it doesn’t work. When the monkey is bored it stops turning bolts and that is quite soon. And this is where it gets a little eery. The computer refashions us into something which resembles itself. So human perception evolves to a Teufelskreis, a devil’s circle. The source of human freedom to get out of it lays neither in philosophy nor in human thinking, because philosophy has never been able to come up with a solid defense for human freedom since it separated itself from religion, beginning with Descartes. This is the failing of the first see and then believe. Because if you only believe what you see you still haven’t got very far.

If it depends on philosophy, indeed we will become beings with spinning hard discs in the upper chambers and for the time being we might be well underway towards that point. Nevertheless this does not needs have to happen. The answer could come for example from Anselm of Canterbury, the man of the only medieval proof for the existence of God, which might be valid, the ontological argument. He said credo ut intelligam, I believe in order to understand. He also knew already that he couldn=t believe his eyes and that he didn’t get very far by rational thinking. He understood that it isn=t first see and then believe, but believe and see, in that order and not the other way around. Without faith no free perception and consequently no real understanding, and no freedom for man. Maybe Jan is right after all. Look out on the stairs I call after him so you won’t break your left leg.