Column Beurskens: O, how pleasant it is to be a Catholic! 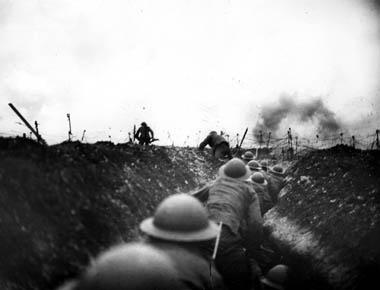 Yesterday evening there was an old English lady on television who was extremely happy to have heard that her father would be included in a general amnesty for deserters from the First World War. Such a thing utterly amazes me. All her life she probably had a loving image of her father, as a brave man as well. What I cannot understand is how the state can add anything to that or subtract anything from it. To us as Catholics that is completely alien. We would judge along the lines of the old texts, of tradition, of what Jesus would say.

But then it might be something typical of Anglo-Saxon countries to consider important what Capitol Hill or Westminster says, or the Law for that matter. The Catholic has a sound distrust towards the state. In fact it is of little consequence. It is a unit which one makes agreements with, as a democracy nowadays, which one respects even, but which doesn’t count for the big things of life. That is why the Catholic Church finds it important what the state says about euthanasia, abortion, about gay-marriage etc., but not infinitely so. Of much greater significance is what people think.
Furthermore, a general pardon for all deserters, welch eine Frechheit, what an insolence, the German would say. The state has no business of forgiving, that’s a blasphemy. The state might quite abstractly ask for forgiveness for sending millions to their deaths, and senselessly so. In our town we had a Belgian doctor, who people said had been a deserter and for that reason could never return to Belgium or only after fifty years, and after such a long time he didn’t want to anymore. It was said he fell asleep in a haystack and when he woke up the Germans had passed by. The man, I believe, never had much of a problem with his past.
My German grandmother had her first husband on leave from the battlefields of Northern France and he told her that it wasn’t that much of a Schützenfest, a shooting party, as they had been led to believe by the state and the press. He went back to the trenches and a short time afterwards she got a little in memoriam note, on which it said, that after a Kopfschuss, a shot through the head, he died a hero’s death for the Fatherland and that he had been laid to rest on a military cemetery nearby. I still keep this little print in a box, after my grandmother had it with her all her life. She never visited the cemetery, and nobody from the family ever did -we were from her second husband-, until one of my cousins a few years ago once passed close by it and wondered whether his grave was still there. She walked straight at it.

Erich Maria Remarque wrote about the First World War his famous pacifist work im Westen nichts neues, nothing new in the West, while at the same time the most indescribable horrors took place in the trenches of Northern France, with as a common feeling the utter senselessness of that war. At Christmas once soldiers came out of their trenches and sang Christmas songs with each other. No, the old lady doesn’t need that general amnesty at all. The simple solution would be to blame the leaders and the state for everything, but that isn’t true either of course. Millions marched gayly into that war. So obviously, there is collective guilt as well. A remark not to take the state too seriously is therefore meant give way to personal guilt, because that really can worry a Catholic. The decorated soldier of the First World War has every reason to worry about his own role in the war, although he did everything they told him to do, and even courageously. The Befehl ist Befehl, an order is an order, has become a problem not much later on as everybody knows.

The conscience of a man, after all, rises up to him much more threateningly than the fellow human being dressed up in black cloth and white bands. Man is conscious of his guilt, repents, and consequently he can trust in forgiveness. That is the only path hat counts. The significance assigned to repentance by the talmudic sages is so great that it is credited with having been created prior to the physical world. Attributed are special life-giving and redemptive powers … says the translator of al-Ghazzali, one of the greatest scholars of Islam. Before God began with the world he created this path for man.

The Catholic on the other hand will have a lot of respect for contemporary or local church authority, on the condition that it lives up to it. Whether it does, the believer can judge himself by his own conscience. As far as the First World War is concerned for example he will have great respect for the pope of those days. Benedict XV came up for peace against the senselessness of war. De whole world ignored him, because he was free and because he stood outside of ideology. But the believer at the bottom knew.

The Catholic and all great religious traditions have a measuring-line, which excels the state by far, is independent of it, and which has a much surer and more dependable relation to truth. It creates the possibility to see through ideologies, which nowadays also are being created by state and media. Man becomes free and independent. The old lady of the television could have been relieved from her suffering a long time ago and the amnesty, which is at hand, doesn’t have any significance. She was right about her father all the time and there is One who knew that all along. In fact it has been good Catholic tradition that it has always been mingled with a tinge of anarchy and that certainly is a pleasant and a cosy feeling.