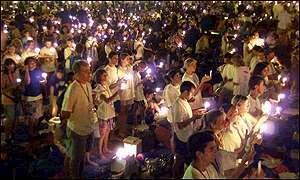 Once I had a patient who had breast cancer from her fortieth year on. Already after the first operations spreading of the disease occurred. Those were the signs she wouldn’t get old. She saw that herself and she stood for the decision whether to take chemotherapy or not. A friend had invited her to accompany her to Lourdes, the famous site of pilgrimage for Our Lady in the south of France. And she asked me whether I thought I wouldn’t be odd for her to go. She never did such a thing before and her relation with the church wasn’t that strong.

An older immigrant worker came into my office and told me that he would go on pilgrimage to Mecca. Once is his lifetime a Muslim tries to make the Hadj, the pilgrimage to Mecca. This man had worked for years in Tegelen’s heavy industry. Of his wages he had send every guilder to his family in Morocco, while he himself lived in one of the decrepit boardinghouses, which were strewn over town in those days. He lived in rooms with some other people together and they slept in shaky iron beds. When I talked to him about the injections he would need I noticed something in him which I realized was not adequately described with only joy about the journey. The sites of pilgrimage, even in the West, flourish as never before. Churches are being closed and torn down, but never a site of pilgrimage. A pilgrimage lacks all rationality. One can never say it is >rational= to undertake one. It offers no visible escape in a situation with seemingly no escape. If you ask what happens there it vanishes already and the question what do I get out of it is apart from being irreverent also fatal. We have no language for the order of reality which exists on a site of pilgrimage. If we walk through Lourdes with unbelieving eyes we only see luminous rosaries and statues of the Madonna filled with water and a cork in her head. And in Benares only fat holy cows and a lot of poor people.

Still those are places where God touches the earth and where a human being can be nearer to Him. This doesn’t mean anything except when you have already experienced what is being said and in that case it needn’t to have been said. The American try it you’ll like it might be about as close as one can get in words. The patient with breast cancer has gone through her chemotherapy courageously until she finally succumbed to her disease. The man who went to Mecca died there under unclear circumstances. Crushed to death in the crowd or a stroke maybe, as was being told. Still those two people were examples of intensely lived, meaningful and pilgrimages. About pilgrimages it can be said with Albert Schweitzer … only those who answer His call, follow Me, will meet Him and they will experience, as an unspeakable mystery, who He is.