Column: The nadir of reality 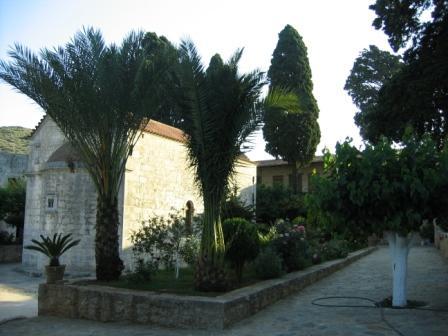 In the mountains above Elounta is situated an old Greek-orthodox monastery. It lies lonely and hidden between rugged and rocky mountains, covered in dry, yellow grass. The wind that always whistles between the mountain tops cannot reach it. The monastery is turned into itself with a church at its inner court and also the chapel of Saint Lazarus, of whom there are so many icons that they are placed in rows in the deep window niches. The harmony of the monastery is an oasis in the arid landscape. The jasmine blooms, as well as the roses and the geraniums. The treetops do not move, not even the palm tree.

In the church are the mass books with their ancient Greek texts lying open on the lecterns. There is a pervasive scent of orthodox incense. The walls are scorched black and ochre-coloured candles burn in sand-filled hods. They have just been lighted by a group of Russian tourists, who profusely make the sign of the cross. The women among them have covered themselves with a piece of cloth. From the priest, who wears his hair in a knot, they get a kind of blessing with oil from the lamp. On the forehead and the hands. Whether I want it too? Of course I do. For God’s sake.

From myself I have to be in touch with such a place and such an atmosphere. If I don’t, there is something wrong with myself. It’s always me. That is something I resolved forever a long time ago. The church tells me nothing or such a monastery tells me nothing are thoughts I don’t permit myself. Through experience I have learned, that this is a good choice. That is how I have always approached spiritual texts. If history says, that the imitatio Christi is a literary jewel I will read it to pieces, till it bleeds so to speak, until I agree and until the lines will shine to me as much as others have said they should. We live in a time where impulses should give immediate satisfaction. What cannot be said in a one-liner, might as well not be said at all. If that is your attitude the monastery and the spiritual text will pass you by. They will never unlock to you.

The convent in Zwolle was the centre of the world to Thomas à Kempis. He never travelled in his life. When he was still a teenager he just went from Kempen to Zwolle with his brother and that was it. He had been nowhere, but he did know how human beings functioned. He is one of the greatest psychologists in history. In the religious world solitude and silence are the centre of the world. Movement is always towards the little, which eventually turns out to be the greatest. And all-embracing. Nowhere happens more. What you cannot find in the village church you won’t find anywhere else either. What you can’t find in ordinary, daily life you will not find anywhere else either.

On the way we passed trough some mountain villages. Some old people walk around, or sit on those wooden chairs with reed seats, dressed in black. It looks slightly disconsolate. They do not make the impression of being the centre of the world, which these villages indeed are not anymore. They don’t look like the Cretan culture anymore, that was enough in itself. Probably civilisation penetrated here too, for I see these green, European trash containers everywhere, which you find at home as well. When the world was still about religion these villages were the centre of reality. When religion disappears from reality, the little is no longer the centre of the world.

In the structure of the Christian churches, and in Islam too in every church or mosque the same thing happens, and the maximal. Outside the small unit there is nothing extra to experience. In the Saint Peter in Rome during a mass celebrated by the Pope nothing more happens than in an ordinary parish church. There is no added value to be going to mass at Saint Peter’s. To the church the centre of the world is the parish. So that’s where every parishioner lives, in the centre of the world where everything happens.

The centre of the western world, though, is no longer in such a small unit. The countryside depopulates, for nothing substantial happens there anymore. The youth migrates from it in search of what is the centre of the world. You’ll get the favella’s of the South American cities, or just our large university campuses, or the World Trade Centre, as a result of the drift to the centre, that turns out to be no centre at all.

In ordinary western life the centre of the world and the summit of everything is always somewhere else. The ideals and targets of the western competitive society can’t be achieved by anybody and those who accidentally do achieve them find out it is nothing after all. Or you’ll be old and worn by that time. The reaching of pleasure is also the end of it … sighed Joop den Uyl (socialist leader in Holland) already. I earn a good wage trying to help people, when to their horror realise that this is true, for the olive tree under which I wrote the last column stands in the garden of the best hotel in Greece. Silence costs a bit nowadays.

When I’m gone from my work I always immediately start working to prevent such a fatal error within myself. With a vengeance I get on it, with this, my much loved pass-time. The centre of the world is in the here and now, somewhere in this silence, in a corner of the world. I try to get in tune with those people, who have understood that and have written it down in ancient texts, which through their beauty have survived time. It is a vision of terror to me, this word of Jesus from the parable about people, who take up the word of God, yet get lost nonetheless, because they allow themselves to be entangled in daily pursuits. Yellow leaves hang on your tree of life. The messengers of death are waiting. You are going to travel far away. Have you any provision for the journey? … said the Buddhist Dhammapada. Long ago I thought of my life having to be in harmony with these texts. Not just in moral sense as best it may, but I should also experience the joy they wish to radiate. Warm must I become from the inside. And the silence, I must love it. If not, I am not in harmony myself.

Frankly one should be able to arrange things like that in everyday life, but that is very hard to achieve in our society. The monks in the desert were often very busy too. Ordinary people also realized, that the real thing happened with them, for the monks lived in the centre of the world. With their problems and ailments people flocked to them for counsel. Sometimes the hermits had to flee even deeper into the desert, for they noticed their spiritual life dropped off.

That’s why their writings have such an enormous actuality for the crazed man of the West. And it’s not about the concrete prescriptions they contain. Abandoning the world literally, for example. Or all sorts of moral. Those are just side-issues. One of the most beautiful texts from the philokalia, a wonderful compilation of texts from the Christian-orthodox tradition, came from someone, who was a bishop, the holy Diadochus of Photiki, bishop of Epirus. And he would certainly have had lots to do. Catharina of Genua hid herself under her bed in the little hospital of Pammatone of which she was the principal. To find silence. To get back to the centre of the world. Teresa of Avila founded monasteries and was therefore very busy. She wrote her autobiography in the middle of al this. That’s why there are many repetitions in it, as she also frequently admits herself. Apparently she had no time to turn back the leaves every now and again. Those who have achieved the highest can live contemplatively in the midst of daily existence. They were able to center themselves in the tumult of the world. Grounding is what one of my patients calls it, who lives a little more within the alternative jargon. And a man who is not grounded eventually means nothing to other people anymore.

You have to make your own little world the centre of the universe again, so you can feel that nothing more happens anywhere else. You can certainly move the spirituality of these old thinkers to your own world, so you come to understand what Thomas meant when he wrote …the cell becomes a dear friend and a welcome comfort. The spiritual cell can come to be navel of the World and the nadir of reality. That is where you have to cherish it and water this dimension of life. It does have to be well swept for that and it has to be cleaned regularly. And it shouldn’t be crowded with visitors. Thomas à Kempis is a fantastic guide in the active life searching for silence. The contemplative life can definitely be combined with the active life. It only makes it more fertile.

When I’m walking through an American city all alone again I must be able to summon this atmosphere, so I can stand it and can actually do something with it. Or just in my daily work, but I still find that rather difficult now. Joy, could that be it? The fulfillment, here and now, of the immortal heritage of mankind … like Evelyn Underhill says it? I’m frightened by the thought alone, that I might reach to something like that now and then, for that is certainly undeserved. Something nobody has a right to and certainly not me.

The centre of the western world cannot be reached by the ordinary man and the one who does reach it will soon get tired of it. But the joy of existence, that can be reached by anyone. In religion, anything can be reached by anybody. You are always in the focus. And the summit is no disappointment. And there is no end to it. It is an ever yielding horizon and it only keeps getting better. The last time we are in the monastery the rays of evening sun plays through the symmetry of the old stones and I’m feeling I’ve come back to myself a little.