New column: The Himalayas of the soul 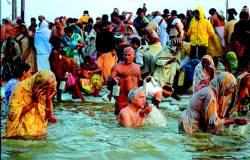 In this time the Ardh Kumbh Mela is going on in Allahabad, a large religious happening for millions of Hindus. It reminds me of my own visit to Benares, now Varanasi. It was an early, fresh morning that we walked to a jetty at the Ganges. Lots of holy cows laid scattered over the dusty roads and that close to the riverbank there was no traffic. Further off several cremation fires were already burning. People in loin cloths stood by the riverbank or they took a bath in the Ganges. The sun had just come up and the morning light gave the scene a steel- blue, mysterious glow. The Ganges is very wide at Benares and it had a leaden hue that morning. It stood high and the current was unusually strong, so the little boat we were in could not go very far off the banks.

Because of this we were close to the people, who were standing up to their waist in the water, sometimes but for a few meters. It felt somewhat inappropriate, but the people in the water did not seem to care. They were laughing at us with friendly faces. One of those with us said … these people might be happier than we are. That was indeed very possible. In any case these words marked the huge distance between us and these people there in the water. The one who spoke the words at least had some inkling of the distance.

The same feeling of alienation I got, when I heard the newsreader speaking of the Ardh Kumbh Mela some days ago. The mass medium is not capable of resolving even the tiniest bit of this alienation. In fact it even augments it of course. This misunderstanding is a characteristic hallmark of our western consumption society. It hasn’t got the faintest idea, but even from the view of a catholic background it seems difficult to get to devotion in a multi-colored Hindu temple, where the monkeys jump all over the place. And the Hindus have many Gods, which is in flagrant contradiction to our belief in one God. Then it’s easier to feel something in common with Islam, which believes in the same God.

Indeed the ways of expression in other religions are sometimes alien to us. One could compare it to a mountain. At its foot you cannot find other people, who are climbing the same mountain. You have to cross deep canyons and impenetrable forests, there at the foot of the mountain. It is a sheer impossibility to find those others. You can best go up, because you’ll always meet at the top. That remains my conviction that eventually we will all meet at the top of the same mountain. And through the many gods of the Hindu pantheon still shimmers the one Brahman. One could regard the gods of the Hindu as our prophets and saints. The Hindu, who prays for light, prays for the same light as we do … for example in the famous gayatri …

Let our meditation be on the glorious light of Savitri. May this light illumine our minds. I myself am in debt with Hinduism, specifically because of one text, the Bhagavad Gîta , the most important chapter from the Mahabharata . Excursions to the East have helped me a lot in understanding a little more about complicated, yet absolutely essential, spirituality in our own tradition. The Imitatio Christi of Thomas à Kempis for example. It is the most frequently and widely printed book in history after the Bible. You can hardly be a catholic without the Imitatio. But it is also terribly difficult to understand. The most complex themes from the deepest depths of human psychology are in there. The chronicler of the monastery writes about Thomas when he dies … he understood admirably how to comfort those afflicted by interior trials and afflictions. I would have never understood a word of this famous work, let alone find it so enchanting, if it hadn’t been for the Bhagavad Gîta. It is about the same themes, about man and his essence, about the Himalayas of the soul, but it says it in other words of beauty. And those new words cast a wonderful light on those sometimes seemingly dark words of the man from Kempen. It is a strange idea that one of the greatest people from Christianity came from a place just a few kilometers away from here and that he is so appreciated by the Hindu and the Buddhist. But Thomas à Kempis, who never in his life ever left his monastery in Zwolle, he would have understood that morning at the Ganges and he certainly would have taken a bath at this sacred place.

I once went to Zwolle on a pilgrimage to his grave. I found it in a new, rather ugly parish church in the shape of a small wooden chest somewhere on a side wall. He didn’t even have his own chapel. The church was not open and I had to enter through the presbytery. The lady who opened the door however did not think it strange that someone wanted to go to that small chest. And indeed, the greatness of Thomas à Kempis is not doubted by anyone, and not by the church either, although she did not sanctify him, because they say, when his coffin was first opened, the body was not lying neatly straight, from which they concluded he might not have been dead when they buried him. And God only knows what words might have crossed his lips when he woke up.

Arthur Schopenhauer once faced the same problem as I did. To him the whole Christian literature was also undoubtedly easily accessible, but he did not understand much of it, let alone that he believed it. He wrote … die Welt als Wille und Vorstellung, the world as will and imagination, a perfect diagnosis of the hopelessness of the human condition – really something for the nineteenth century intellectual, who was fascinated by him -, but he did not get to a solution in that book. How he felt is in the Gîta … life goes from my limbs and they sink, and my mouth is sear and dry; a trembling overcomes my body, and my hair shudders in horror. My great bow Gandiva falls from my hands and the skin of my flesh is burning; I am no longer able to stand, because my mind is whirling and wandering.

The world was just what man imagined himself, a result of man’s will. Creation doesn’t make sense. Later though, Schopenhauer wrote about the holy sounds in the Indian Veda’s … sie sind die Trost meines Lebens geworden. They have become the consolation of my life. Indeed, on the top of the mountain in the end we all meet. And the top of that mountain is also the deepest inside of man. In the words of Rabindranath Tagore, the poet from Bengal, who sometimes had himself rowed to the middle of a lake and then meditated there for hours … the time that my journey takes is long and the way of it long. I came out on the chariot of the first gleam of light, and pursued my voyage through the wildernesses of the worlds leaving my track on many a star and planet. It is the most distant course that comes nearest to thyself, and that training is the most intricate which leads to the utter simplicity of a tune. The traveler has to knock on every alien door to come to his own, and one has to wander through all the outer worlds to reach the innermost shrine at the end. My eyes strayed far and wide before I shut them and said ‘Here art Thou’. The question and the cry ‘O, where?’ melt into the tears of a thousand streams and deluge the world with the flood of assurance ‘I am! ’ Many a young human being of our times would be much better off if he could only but start to believe what is written here … no step is lost on this path, and no dangers are found. And even a little progress is freedom from fear. And if only he could see with Rabindranath Tagore about his feelings … by what dim shore of the ink-black river, by what far edge of the frowning forest, through what mazy depth of gloom art thou treading thy course to come to me, my friend?

My own debt to the Bhagavad Gîta cannot be redeemed but by devotion, for example when somewhere Krishna (God) says to Arjuna … there is a war that opens the doors of heaven, Arjuna! Happy the warriors whose fate it is to fight such a war. Many of the negative feelings of young people nowadays are seen as illnesses and psychological disturbances. In the East and in the entire Christian literature they are viewed as equally numerous trumpet-calls to salvation by Him who is always looking for us … in the words of Jesaja … even before they call Me I will answer, while they are still speaking I will hear them.

In the Taittiriya Upanishad Bhrigu goes to his father and asks him to explain the mystery of Brahman ( God). He sends him out praying. Bhrigu keeps returning with another result. Then the mystery of God lies in the spirit, then in reason, then in the food of the earth, then in life itself. Bhrigu keeps coming back thinking this, thinking that, but the last sentence goes as follows … so Bhrigu went and practiced tapas, spiritual prayer. And then he saw that Brahman is joy: from joy all beings have come, by joy they all live, and unto joy they all return.